Every Wednesday after school, seven students walk down to English teacher Pam Gower’s room to take part in Clawmarks, a club where they create works of art in literature, painting and book making. Those who participate gain the satisfaction of creating something; even some find it a good hobby, like freshmen Bella Roberts.

Clawmarks is the student literary magazine, which includes other students’ submissions of writings or art. The end date of accepting submissions is April 26, and from then on, the process of making their one magazine kicks into full gear.

In the beginning, there was the art club and the literary club. Since Gower was running both, she thought it would be a great idea to combine them both to make Clawmarks.

Students are encouraged to be artistic with the projects they create.

“What I realized was that both writing and art is about creativity. Why couldn’t we put it together into one club?” Gower asked. “Our mission is to promote and celebrate the creativity in our community through writing and art.”

Since the clubs have combined to gain more people and more skills, the students are able to plan for their literary magazine as they work on other projects such as decorating the teacher’s lounge with decorative papers and quotes. They also have paintings hanging in the cafeteria and flyers for anyone who is interested in joining.

Sophomore Hannah Bolton and other students have responsibilities and deadlines to meet.

“We plan fundraisers, field trips, and talk about the plans for the magazine and how it’ll flow with themes,” Bolton said. “We read through and make sure each piece is appropriate and what section it should go into.”

Everyone who participates spends most of the time working as a team, but some will individually edit submissions for their magazine. For students wanting to submit their work, they can email it to Gower or share it with her in person at her room.

Anyone interested in the arts can join, and that is especially why sophomore Tyler Gibson loves being a part of it.

According to Gibson, he has been made fun of for participating in the club, but he does not let that stop him from staying.

“Gower accepts anybody, and we have a lot of fun,” Gibson said. “I know that I am the only boy in Clawmarks, and I like showing that just because it is about poems and writing doesn’t mean that boys can’t do it too.”PHOTO ABBEY SALYER 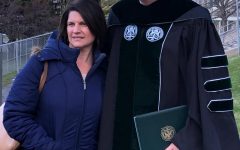