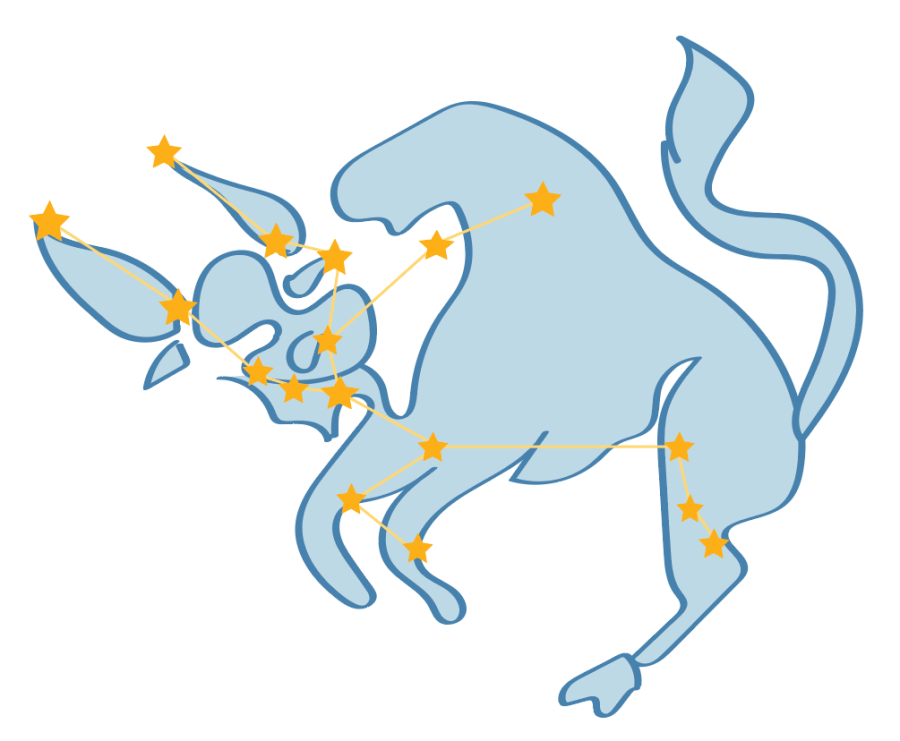 Aries- The best time to spot the Aries constellation is during November and December at around 10 pm. Aries has been represented by the image of a ram since the 7th century BC when it was discovered in the Babylonian era. Hamal, meaning the head of the ram, is the brightest star in the constellation and was used by sailors to help them navigate the seas. In Greek mythology, the Aries constellation comes from a story about a powerful flying ram who saved the King of Thebes’s children who were in danger. The ram is said to have had golden fleece that was a coveted treasure.

Taurus- Taurus the Bull is most visible in the fall through the spring and sits next to the constellation Orion in the sky. A cluster of stars called the Hyades makes up the face of the constellation. A 0.8 magnitude red giant star called Aldebaran is the bull’s eye in the constellation. The magnitude of a star refers to the star’s brightness, with brighter stars having a lower magnitude. Taurus the Bull memorializes the story of Zeus, the leader of all Greek gods,  changing himself into a bull to win the heart of the princess Europa.

Gemini- Gemini depicts an image of twins in the sky, though the stars that make up this image are very different. Castor, the star that is fainter and more white, and Pollux, which is brighter and more yellow, are the “twin” stars that make up the heads of the constellations. January, February, and March at around 10 pm are the best times to spot this image in the sky. In the myth, Castor and Pollux were brothers reunited in the sky by the god Zeus. After Castor was killed in battle, Pollux, his immortal brother, begged Zeus to relieve him of immortality and join his brother in the heavens as the constellation of Gemini.

Cancer– The Cancer constellation is the dimmest of all the zodiac constellations and has no mentionable stars but makes up for it with the Beehive star cluster. Late winter and early spring are the best times to see this constellation between Gemini and Leo. This constellation shone over the summer solstice and represented the summer season. This is why the sun was directly tly over the Tropic of Cancer during the solstice. Cancer is called the Gate of Men in ancient philosophy because many people believed that it was a path to heaven through the sky.

Leo- The Leo constellation is easy to spot as its brightest star Regulus- at a 1.35 magnitude- sits at the bottom of the lion shape of the constellation. A pattern of stars called the Sickle also makes Leo the Lion easy to spot as it forms the lion’s mane. In Greek mythology, Leo is represented in the sky by the Nemean Lion, famously killed by the hero Hercules. The Nemean Lion was unique because bronze, iron, or stone could not puncture its hide.

Virgo- The Virgo constellation is called the Maiden, which relates to its mythology. The Maiden represents the goddess Persephone who is the harvest goddess. In the myth, Persephone was the daughter of Demeter, the Earth goddess. When Hades kidnaped Persephone, the god of the Underworld, the fruitfulness of Earth suffered because Demeter was so distraught. Persephone was returned to her mother but ate a pomegranate while in the underworld after being told not to. This altered the agreement with Zeus and made her time on earth and the underworld split. The Virgo constellation appears in the spring and summer, corresponding to Persephone’s role as the harvest goddess. Virgo is the largest zodiac constellation and second-largest constellation overall. Spica, a 1.04 magnitude white-blue star, makes up one hand of the Maiden and is the easiest way to spot her in the sky.

Libra- Libra’s symbol is a scale with roots to 2,000 B.C. during the Babylonian era. Back then, the sun crossed over the Libra constellation during the Autumn equinox. Harmony and balance represent the equinox as the times between day and night are equal, and hot and cold weather meet their extremes. Now, around 3000 years later, a star in the Libra constellation called Zubenelgenubi will be conjunct with the sun around halfway between the autumn equinox and the winter solstice. Libra is most visible in the sky in the summer and the best time to look for it is at around 9 pm in late June.

Sagittarius- Sagittarius, or the Archer, depicts the image of a centaur with a bow. In Greek mythology, a centaur is a half-man, half-horse creature. According to legend, the centaur in the constellation was named Crotus. He invented archery and was put in the sky by Zeus. Something unique about this constellation is the direction of the Archer. The arrow in Sagittarius points directly towards Antares, the star that makes up the heart of Scorpius. Sagittarius is most noticeable in the sky in August and September.

Capricornus- The Sea-Goat, or Capricornus, is the smallest zodiac constellation and is the hardest to find in the Northern hemisphere. September and October are the best time to look for Capricornus. The brightest star in the constellation is a 2.8 magnitude star named Deneb Algedi. Saturn can also be found around Capricornus during its visibility period. The story of the Sea-Goat comes from Greek mythology. The god of the wild, Pan, was running away from a fire-breathing monster named Typhon when he panicked and changed himself into a fish and then a goat.

Aquarius- The constellation Aquarius is located in a region of the sky called The Sea, which is dark and deep looking. Aquarius has the name Water Bearer and has had many associations with water throughout history. In Greek mythology, Aquarius is symbolic of a flood brought on by Zeus that ended almost all of humanity. Aquarius is also related to the god of the Nile River in ancient Egypt. Aquarius’s two brightest stars are named Sadalmelik and Sadalsuud. This constellation is best seen in early October.

Pisces- November and December are the best time to see the Fishes, the image in the sky representing the Pisces constellation. According to the Greeks, the fishes represent the goddess of love Aphrodite and her son Eros as they escaped from the monster Typhon by turning into fish and swimming away in the Euphrates river. They are said to have tied themselves together with a string to stay with each other. Pisces’ brightest star is named Alpherg and has a magnitude of 4.53.